The Power of Songs

What do a Beatle’s album and the Bible have in common ?

….they both involve songs… and remembering songs for a lifetime!

From the radio to iTunes, Greek mythology to the Bible, knowledge is often transmitted via singing. For thousands of years, storytellers, troubadours, historians, and priests maintained a body of knowledge through oral communication before it was ever recorded in the written word. In fact, the first clay-pressed cuneiform tablets with writing on them discovered in Mesopotamia were actually used to keep records of exchanges and supplies! Writing was essentially accounting. Later, it became used to also relate prayers (such as another one of the earliest written works, a prayer to the Sumerian beer goddess Ninkasi) and eventually such texts as the Old Testament which had been previously relayed through songs.

Think of all the songs we have learned from a young age and still remember: Happy Birthday, the ABC song,etc. Now think of the first time you heard your favorite song. I bet you also have a favorite album you know every word to! According to Rauscher (2003), music increases comprehension and retention of information in children. It allows information to be broken down into parts (lyrics) and yet works as a whole (the song) to impart an overall piece of information. Not only this, I might add, but with its repetitive nature (think of a chorus that repeats between new lyrics), a song is able to be memorized more easily than disparate pieces of information. Pre schoolers who are exposed to music score higher on the Wechsler Individual Achievement Test in all aspects of reading comprehension, spelling, numerical operations, and listening tasks.

With this in mind, the modern educator, no matter how seemingly silly it may be, should never underestimate the power of a song to teach information, routines, values, or simply as memory aids. Even improvised, off-the-cuff, and simplistic songs can be powerful heuristic devices in early childhood education. I have found that songs are especially effective in teaching unfamiliar concepts in second language acquisition.

Prior to me stringing words together into a ridiculous tune, these children had no idea what the French words for “autumn,” “coat,” “leaves,” or even phrases such as “change colors” (changer de couleurs) meant. After repetitions of this song, they were able to use these words and phrases in sentences. Like Homer singing the Odyssey, the words will be ingrained in their memories and they will have a mental frame of reference for later use in their vocabulary.

I make other songs like this throughout the day for the students to learn a myriad of other vocabulary such as one for greetings, learning continents, the weather etc. ( Check out the Petit Paris Preschool Facebook page ! ). I often find them singing the song autonomously without realizing it. Its a great tool for building a young student's lexicon.

Whether songs mimic the natural sing-song rhythm of “motherese” spoken naturally by mothers to babies cross-culturally, the “catchiness” of the words set within the context of a beat, or the repetition of singing works with the brain’s natural neural connections to ease learning, especially second-language acquisition, the songs we learn from an early age stay with us throughout our lives.

Also check out www.agbell.org “Music as a Teaching Tool” or directly to the source at Volta Voices， July/August 2010

The Value of Community Service

The Sound of Silence 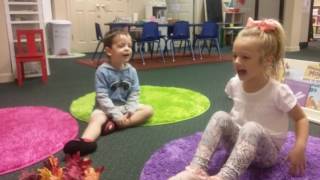 The Power of Songs